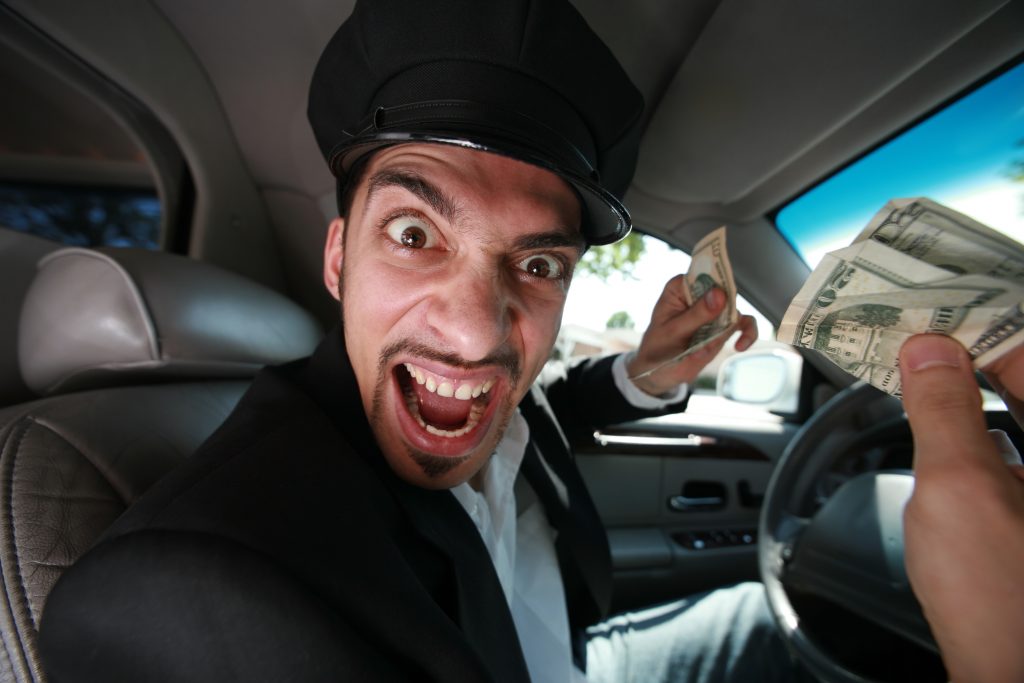 Unfortunately, every city has some taxi drivers looking to take advantage of tourists. We’re not saying that all taxi drivers can’t be trusted. In fact, most of them are legitimate and honest.  But with part-time ride share drivers, independent taxi drivers and the occasional well publicized bad experience, it becomes more difficult to find reliable transportation from the airport.  We have developed these tips to avoid being overcharged by an airport taxi.

Become familiar with your destination

Don’t be easy prey. Before looking for an airport taxi, make sure you know in general how to get to your destination. Write down or take a screenshot of the address. Gave it in the local language as well as a phonetic spelling.  Keep a copy of a map with your destination clearly marked.

We highly recommend using an app to map your destination too. The app can show the route and distance. Getting to know the major street names is also good advice. This makes it much easier to set a fair price with the driver.

If you have a smart phone with GPS, watch where you are going in case the diver decides to circle the block a few times. When you can plot your drive progress in real-time, you’ll quickly know if the taxi driver is taking you on the ‘scenic route’.  Just remember, in many cities the fastest route between points A and B may not the shortest route, so give the GPS some time unless he’s literally driving in circles.

Always know a fair price before you look for an airport taxi. When you make your hotel reservation, see if they have a hotel to airport shuttle.  If not, they should provide estimated fares from the airport. You can also ask a local resource like your sales people or client how much a taxi to your hotel should cost as well as which cabs are reliable and trustworthy.

When you arrive at your destination, often there are tourist information desks at an airport that can give you advice.

When leaving the hotel, ask the receptionist what a fair price would be to your destination.

If you can’t do this, ask multiple taxi drivers before accepting a ride.

Most cities regulate their taxi companies. As a last resort, select an official taxi.  They are almost always preferable to unmarked cars.

Set the price before you get in to the airport taxi

With any taxi, you should agree on a price before you get into the car. Be very clear on your destination then discuss a price with the driver. Only pay once you have arrived at your destination. Travel Advisory suggests to always take only official taxis, and always agree to a price before entering the taxi. Even with a metered taxi.

Once you have agreed on a price, check if there are any catches to this deal. For example, some places will offer a cheap price that include a stop at a souvenir shop which pays commission to your driver. Other drivers may try to convince you that the price quoted was per mile, not for the whole trip.

You also must confirm the currency. It’s not uncommon to be given a price of 50, expecting it is the cheap local currency, only for the driver to say that he meant US dollars at the end of your ride.

If the airport taxi has a meter, use it!

The best prices are usually had when you arrange the ride at a kiosk, such as found at an airport.  If you cannot use the kiosk, and must take a taxi, find one with a meter. Usually using the meter gives you a better deal than an independent taxi who throws out a price. But there are a few catches. You will still need to make sure the driver doesn’t pull a fast one on you. There are many ways to rig a taxi meter, unless you’re in a jurisdiction where the local government enforces fair metering practices. In the US, we did not have to worry about rigged meters as much as other parts of the world, but the increase in independent drivers and ride-shares has made this a concern in most US cities as well.

If the airport taxi has a meter, make sure that the driver uses it and watch it like a hawk. You can usually find the metered rates on a sticker inside the taxi. Sometimes the per mile rate may be slightly higher for late night rides. Make sure the meter and the advertised rate match up. Taxi meters can be tampered with to run fast. Some are distance-based, some are time-based. Taxi drivers with time-based meters may drive extra slow. Taxi drivers with distance-based meters may take longer routes.

Check the driver isn’t taking you on the ‘scenic route’ by following your journey on GPS. Watch the meter to make sure there are no sudden jumps in price. If there are sudden increases, it probably means the driver is tampering with the meter. In this case, make sure to speak up!

There have even been some cases where the taxi driver will keep the meter running while they fill up at the gas station.  Make it clear to the driver that you are not paying for unnecessary stops.

Be Prepared to Barter with an Independent Airport Taxi

When setting a price with a non-official unmetered taxi driver, you will probably need to barter to get a fair price. There are no hard and fast rules about how best to barter, but always try to do it with a smile. Know how much the fare should be, see what the driver offers and go from there. A successful barter is when both driver and passenger are happy!

Hammering a taxi driver over a few cents will probably annoy your driver, and may be more trouble than it is worth. It can also lead to a rip off down the road and possibly an unsafe ride.

If the taxi charge sounds too good to be true, it probably is

It’s easy to get excited by a taxi that is promising an incredible fare. Finding a driver that is going to take you on your 3-hour ride for less than the price of a bus usually means there is a big catch. It may be a shared taxi. You might stop at every shop and hotel along the way. Perhaps the price doesn’t include fuel.

If you have found a fare that sounds too good to be true, proceed with caution!

Don’t be afraid to get out of a taxi if you feel you are being ripped off or it’s unsafe. You should try to hop out somewhere with other people around, but not if it’s unsafe with excessive traffic. If things get desperate, threaten or pretend to call the police. If possible, keep your bags on the seat next to you, rather than in the trunk. This avoids the driver holding your bags for ransom and makes it much easier to walk away.

Arrange an Airport Car Service at your destination

If all of this causes concern or you are worried about your safety, the best choice may be to arrange a car to pick you up at the airport when you arrive.  You would have a professional driver that works for a legitimate company, and know ahead of time the total cost of your transportation.  Drivers Unlimited has relationships with many limo companies in cities through out the US and the world.  We would be happy to coordinate your transportation needs for NYC airports, as well as at airports in other cities.  Please give us a call to get an airport transportation  quote.

New users get $50 off their first round trip reservation

to reserve your first ride